Every year, StackOverflow Research releases the raw (anonymized) data from their annual developer survey. The StackOverflow developer survey consists of several dozen questions, from simple demographic questions to things like "Do you drink alcohol while coding?" This year I probed the data a little bit, and I thought you might be interested in my first result.

The question that I thought would be of greatest interest to Compelling Science Fiction readers was a simple one: "Star Wars or Star Trek?" Tens of thousands of developers responded, expressing their preference for either Star Wars or Star Trek. At this point you're probably thinking to yourself, "Joe, I can see where this is going, especially because you spoiled the whole punchline with the title of the article!" Well, you're right. The first thing I decided to do was see how the salaries of the two fandoms stacked up. Here are the results:

And for those of you who love plots (the chart kind, not the story kind), here's the same data, complete with error bars: 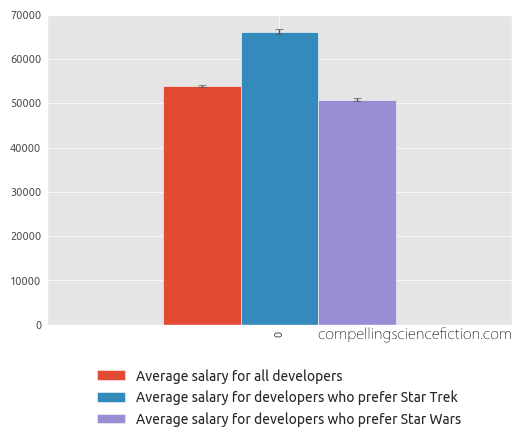 As you can see, developers who are Star Trek fans make significantly more money than both Star Wars fans and developers in general. At this point you might be thinking "but Joe, there are too many significant digits in your table and you didn't control for any confounding factors. This result can't be extrapolated from at all!" And you would be right again. I'm not surprised, because you read Compelling Science Fiction, and you're a smart cookie.

If you enjoyed this post, please consider subscribing to Compelling Science Fiction. Your support helps us pay authors who bring great content into the world.

Back to Table of Contents